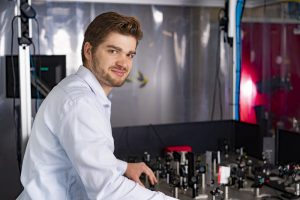 Peter Kraus has received a Starting Grant from the European Research Council (ERC) of 2.0 million euro, which includes an exceptional investment funding of 500.000 euro. The grant allows him to investigate the ideas put forward in the research proposal ‘Attosecond nanoscopy of electron dynamics in strongly correlated materials’ (ANACONDA). Kraus is a tenure-track group leader at ARCNL and assistant professor of physics at VU Amsterdam.

The ERC uses the Starting Grants to support talented scientists in the early stages of their career in pursuing ground-breaking projects for a duration of five years.

When asked about his plans Kraus says that he wishes to “build the first attosecond microscope to follow ultrafast nanoscale material modifications between insulating and conducting states of a novel class of materials – the strongly correlated materials”. This attosecond microscope will provide pictures with a time resolution of a billionth of a billionth of a second (10-18s, attosecond), and spatial resolution with a billionth of a meter (10-9 m, nanometer). This is needed to investigate and understand strongly correlated materials, which have drastically different properties than expected from conventional theories due to the complicated mutual interactions of their electrons.

The materials investigated in ANACONDA can be triggered to switch their resistivity within femtoseconds (10-15 s) to attoseconds, which has ample applications for future oxide electronics such as memory or new transistors. Kraus further adds that “the experiments in ANACONDA will not only visualize in real-time how such materials switch their resistivity, but also demonstrate that these materials may be entirely switched within the oscillations of the electric field of light pulses, thus enabling future electronics with PHz speeds – six orders of magnitude faster than current technology. More generally, the availability of attosecond and nanoscale visualization of electronics processes will have ample applications for investigating not only quantum materials, but also for real-life applications in the semiconductor industry, where current critical dimensions of chips are on the nanometer scale.”

Finally, Kraus is happy about the opportunities for his research group: “The ERC grant will further help my co-workers to realize their ambitions, through hiring of new-coworkers and additional investment funding. ANACONDA is a personal grant, but it will also help train a new generation of scientists.”