To extract information from very subtle changes in a signal, researchers either have to measure over a long period, or enhance their signal. Researchers at ARCNL and Delft University of Technology managed to do the latter for reflection measurements on samples similar to those used in nanolithography. By inducing a so-called plasmonic resonance, they amplify the changes in reflection that are caused by laser-induced acoustic waves in their samples. Such reflection measurements can be used to detect nanostructures buried under layers of opaque material, as the Light Matter Interaction group has shown before. The researchers have reported their findings in Applied Optics on August 20,  2021.

Nanolithography machines used in the production of state-of-the-art computer chips and components print several layers of nanometer-size structures on a wafer. Grating lines on the wafers that act as markers, are essential for proper alignment of consecutive layers, but they are often hard to detect, because the layers applied on top of the markers can be opaque to light.
“Our group discovered that high frequency acoustic waves can be applied to uncover structures hidden under many layers of dielectric material or metals. When these sound waves reflect on a buried structure, they take an image of this structure back to the surface that gets slightly deformed periodically in time. We can detect this deformation by measuring the changes in the reflection of light at the surface of the sample. However, the reflection variations are very subtle and are easily lost in noise”, says first author Guido de Haan. “So, we thought of a way to enhance the reflection signal.”

Plasmonic resonance
De Haan and his colleagues found a solution in a phenomenon called plasmonic resonance. “Under certain specific circumstances, when light hits a metal-semiconductor interface, part of its energy transfers from photons to electrons that start to oscillate in the metal near the surface, forming what we call a surface plasmon resonance”, de Haan explains. “This process only occurs under very specific conditions. It depends on the wavelength and angle of incidence of the light, as well as the material properties. On flat metal surfaces it is complicated to induce a surface plasmon, but it is made easier by a grating at the metal surface.”

Reflection dip
Plasmonic resonance reduces the amount of light that is reflected at a sample surface, because the light that is coupled into the surface plasmon is not reflected. This is not a problem, because the researchers are not interested in the reflection itself, but in the reflection changes caused by acoustic waves in the material. De Haan: “The plasmonic grating we created on top of our sample, causes a dip in the reflection signal at a very specific wavelength. High frequency sound waves returning from a buried structure, periodically cause subtle changes to the plasmonic grating at the surface. Since the plasmonic resonance is very sensitive to the precise shape of the grating, the wavelength at which we see a reflection dip, changes periodically too.” 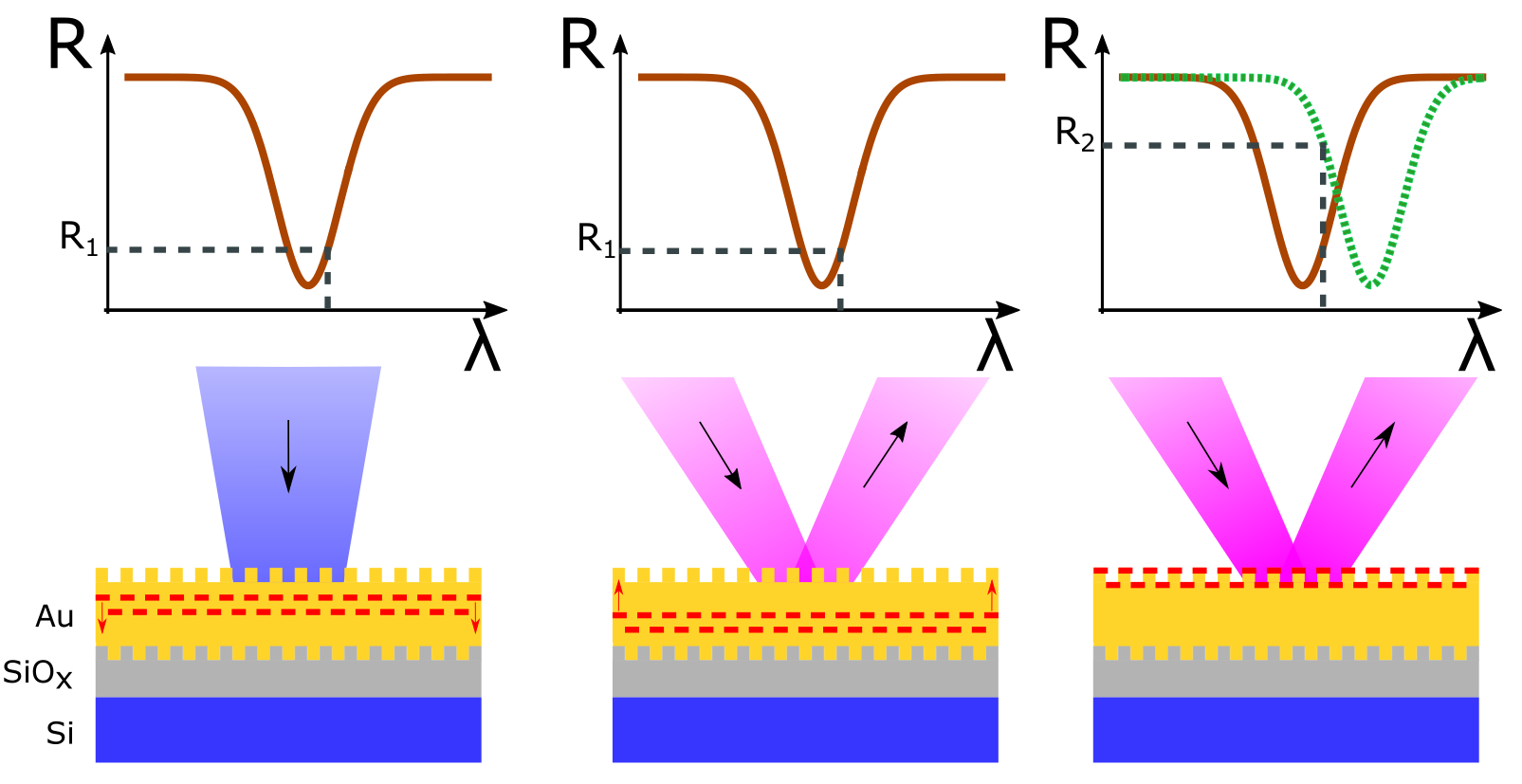 Proof of concept
De Haan and his colleagues have shown that a plasmonic grating on top of a sample can greatly improve acoustic wave induced signals. However, from an industry point of view an extra plasmonic grating is not desirable. “This is a proof of concept,” says de Haan, who includes the concept in his PhD thesis that he is to defend in January 2022. “Further research is still needed to make it applicable in the commercial nanolithography industry. We will try to develop ways to use plasmonic resonances in samples that are actually usable in industry applications.”