The beginning of a new tradition

‘Researchers at ARCNL have different backgrounds but we are united in one mission,’ says scientific director Joost Frenken. ‘We hope to open up new opportunities for the semiconductor industry by journeying into unknown territories of fundamental physics.’

What stage are you in now with ARCNL? 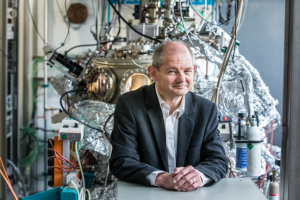 ‘We have been in operation for 18 months and we are gathering steam. A lot has been accomplished in a short time. Our lab is up and running, we have hired more than sixty people, and we are already preparing our first publications in academic journals.’

Do you have trouble finding well-qualified people to fill up your lab?

‘Surprisingly, no. You would think that it is almost impossible to find the right people. They need to be excellent fundamental physicists and also genuinely interested in their discoveries ending up as something useful. In my time as a junior researcher, this would have seemed to require almost a split brain. But nowadays, this combination is quite common. Indeed, the fact that we get the best questions from smart people who need the answers seems to be highly attractive to today’s young scientists. They flock to us from all over the world, since they are inspired by the prospect of doing groundbreaking fundamental research that becomes useful and applied on a relatively short timescale.’

You have said that you accepted the invitation to lead ARCNL because it is such a unique experiment. In what way is ARCNL unique?

‘Nowadays there are many funding tools for valorization; that is for the societal application of research. But most of these programs have only a short duration: typically four years. This makes it hard to set up a sound basis of trust. As the manager of a SmartMix consortium, I have discovered that just a few years extra are quite beneficial. Now our cooperation with ASML is guaranteed for at least ten years. That gives us plenty of time to learn to speak each other’s language and build a tradition of channeling information back and forth. We get the chance to let things grow here; that’s what makes ARCNL a unique experiment.’

Is the phenomenon of academics rooted in fundamental physics diving deeply into applications also something new?

‘That is a revolution, and one actively sought by ASML. Traditionally fundamental physics did not concern itself with how it could be put to use. By changing this, ASML expects that completely new fields of knowledge will be opened up to them. One of our group leaders for instance has spent part of his career trying to find out how constant nature’s constants have been in the 13.8 billion years our universe has existed. He now works on the properties of plasmas. He is therefore contributing a tremendous amount of fresh background knowledge and this could potentially accelerate the transfer of fundamental knowledge to society.’ 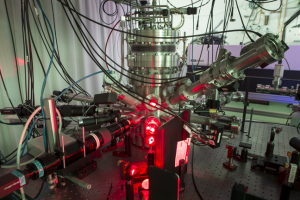 Do you think ARCNL deserves replication?

‘It’s being replicated already. Large, powerful industries are still looking to fundamental research to help them stay in the front line, just like in the days of the great Nobel Prize winning industrial labs. The difference is that nowadays they want to outsource their fundamental research. Apart from ARCNL, I know of two comparable initiatives in the Netherlands: QuTech and ARC CBBC. The first operates in close connection with Intel on quantum technology. The latter is a consortium of academic researchers and AkzoNobel, BASF and Shell, working on chemical building blocks. Both are long term cooperations focused on building communities. ARCNL may well mark the beginning of a new tradition.’