ARCNL’s first PhD student Pavel Antonov, who defended his thesis in the fall of 2017, looks back with pride at his time at the institute. ‘When we started, we were only a few people working at an institute that only existed on paper. And look where ARCNL is now: welcoming new colleagues every month, erecting a new building at a fast pace, and producing high quality papers, invention disclosure forms and patent applications.’ 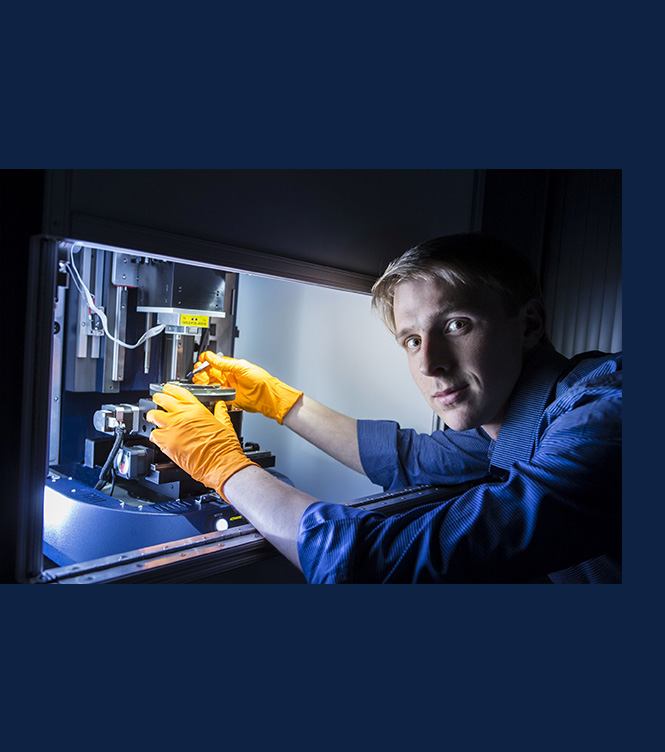 You were born and raised in Ukraine. How did you end up at ARCNL?
‘My supervisor in Ukraine advised me to contact one of his former colleagues who worked in Leiden on surface chemistry. I was studying physics at the time and wanted to expand my horizon, so I decided to move to Leiden University for a short-term Master Research Traineeship. There I met Joost Frenken and took up his invitation to join his group as a PhD student studying the fundamental aspects of friction. When he was appointed director of ARCNL, he asked me to follow him there. That sounded as an interesting challenge, so I did.’

What was your PhD research about?
‘Basically, the aim of my work was to try and scale up three different nanoscale lubrication phenomena to the macroscopic scale. On the first approach, we used arrays of silicon nanopillars to reduce dry friction. The idea was that each pillar would behave like a single atomic force microscope tip, vibrating at a high frequency, thereby gently lubricating the movement of an adjacent object. On our second approach, we studied monolayers of graphene. The nanoscale friction between two of these layers strongly depends on their mutual orientation: when both layers are aligned, they ‘click’ and cause friction. But when misaligned in the optimal way, the friction reduces by orders of magnitude. This is called superlubricity. In spite of all our efforts, we could not demonstrate a similar effect on the macroscopic scale. Nevertheless, we have shown that application of graphene on metal surfaces can reduce friction by a factor three. Three times less friction, just by adding one atomic layer of graphene! This was a very nice result. The third subject I worked on was quite similar to the second one, and was partially related to ASML; we were studying the lubrication mechanism of diamond-like carbon coatings, which is related to formation of graphite or presumably graphene-like layers at the sliding interface.’

What was your time at ARCNL like?
‘At the beginning, according to my memory it was Joost, me and the secretary in a room at AMOLF. We did not have our own office, no labs, no nothing. I got the opportunity to help set up our new lab, and think about which equipment it should contain. At Leiden University, we were working with an old Atomic Force Microscope, which was not able to facilitate all of the measurements I thought would be useful. By that time, Joost and I decided to test and buy a new type of AFM for the ARCNL labs, which to this day is also used by ASML.’

You were also actively involved in the works councils of AMOLF, FOM and ARCNL. Why?
‘I wanted to learn more about the internal structure of research institutes. Also, being part of a works council gives you the opportunity to speak to managers on a regular basis, which is not that common for a PhD student. And I thought it would do wonders for my Dutch (which he now indeed speaks fluently, ed.). So I decided to join the AMOLF works council at the time ARCNL still resided under the AMOLF umbrella. Later I also became a member of the central works council of FOM, and I was involved in setting up the first works council for ARNCL.’

Since last year, you have been working at ASML as a design engineer. In what way did your ARCNL time prepare you for your current job?
‘While working at ARCNL, I got a good first impression of what working in industry would be like. The horizon of research projects in industry is shorter than at a university, and you are forced to not only consider the scientific relevance, but also the practical use of your work. At ASML, I am also working on tribology, which plays a role in positioning the wafers on the wafer stage, and thus in achieving our tight overlay specifications. So, content wise, there is much overlap with my PhD work. But of course, at the research department of a company, go or no-go decisions are made on much shorter timescales. As a specialist, I am responsible for tackling fundamental problems we experience with our machines today and tomorrow. Especially since Steve Franklin recently started a tribology group at ARCNL, I will certainly keep cooperating with the institute.’