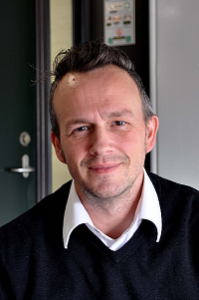 Jan van Dijk recently started a theory group at ARCNL that will model the plasma dynamics on different timescales. Van Dijk aims to gain a theoretical and numerical understanding of ultra-dense, high energy plasma’s, and by doing so contribute to a more efficient EUV production process with less collateral damage. Jan van Dijk combines his activities at ARCNL with his appointment as assistant professor at Eindhoven University of Technology.

Jan van Dijk obtained his PhD degree in 2001 at Eindhoven University of Technology (TU/e) on the basis of a numerical study of thermal plasma light sources with the help of Plasimo. After working as a PostDoc at Eindhoven University, the University of Illinois, and the Keio University in Tokyo/Yokohama, Japan, he returned to TU/e to work on microwave plasma sources which are used in the production of optical fibres. In 2003  he obtained a VENI grant which he used to study the modelling of non-thermal bio-medical plasma sources. Since May 2007 he is employed in the group EPG as Assistant Professor. His fields of interest include modelling of electro-magnetic fields and transport phenomena. In addition he studies object-oriented code design and tries to use modern C++ idiom like expression templates for solving coupled linearized systems of equations.