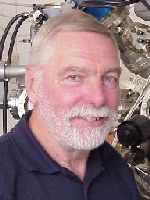 Jan Verhoeven is guest scientist in the group Nanolayers of the ARCNL.

In 1970 he obtained his masters degree in Technical Physics at the Technical University Delft. He started his professional career in 1970 at AMOLF as leader of the Vacuum Technology Laboratory; in 1984 the group changed its focus to thin films. An important part of the experimental efforts concerned the fundamental research on growth and ion induced modification of ultra-thin films of nm thickness. A major part of the efforts was focussed on Mo/Si multilayers for reflective optics in EUV Lithography. Verhoeven was the first to demonstrate promising improvements in reflectivity achieved by ion-induced smoothing of the silicon surface. This can be considered as the onset to successive applied research in the development of soft X-ray reflection by Mo/Si multilayers. His contribution in this field resulted in 2005 in his PhD degree in Physics from the Technical University of Eindhoven.
The activities of the group extended to the growth of metal islands on oxidic supports and their application in chemistry as well as plasmon excitation. In 2003, as a result of these activities, the group was renamed in Nano Fabrication Laboratory. At the end of 2006 Verhoeven became involved in a project on double break damage of DNA using soft x-ray radiation in the group Cell Biology of Ron van Noorden at AMC. This collaboration has continued after Verhoeven his retirement.

After his retirement in 2007 Verhoeven also continued his activities as consultant in the XUV Focus group of Fred Bijkerk (UT), consultant at AMOLF in the group of Marc Vrakking and as guest scientist at Interface Physics Group of Joost Frenken (Leiden University).

During his career Verhoeven collaborated with many other groups. From 1994 to 1998 he was the coordinator of the EC network: “Nano-scale Structures of Multilayer systems for X-Ray Optics”. This network included 9 other institutes and university groups. Participants came from The Netherlands, France, Germany, England and Portugal.
Together with Jom Luiten of the TUE, experiments were conducted on the generation of Cherenkov radiation in the regime of soft X-rays. He participated in theoretical considerations and subsequent publications to generate diffuse radiation in the soft x-ray region by Zhyrair Gevorkian (Yerevan Physics Institute, Armenia). With Joost Frenken (Leiden University) and Onno Gijzeman (University Utrecht) Verhoeven collaborated in metal cluster formation on supports. He was also involved in deposition of hydroxyapatite to be applied in bone implants by John Jansen (Nijmegen University). Collaboration with Philips Research groups (Jozeph Braat, Dick de Boer, Thijs Viegers) resulted in 3 patents.