On January 9, 2017, Andrea Peña received the Hendrik Casimir Prize 2016 for  best Master student. The Casimir Research School yearly awards these prizes to the best MSc students in (Applied) Physics of Leiden University and TU Delft. The prize consists of a certificate and a sum of €750.

Andrea carries out a master project in the EUV Targets group of Paul Planken. For her project she investigates potential correlation of the amplitude of THz pulses from a two-color laser with the excited modes of an air-plasma mix. 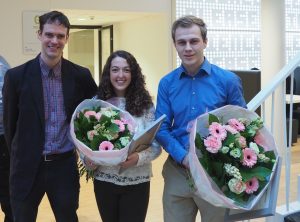