The EUV Photoemission group started up in August 2015 and will use various experimental approaches in the field of photoelectron spectroscopy/microscopy. The group will study the microscopic properties of materials and processes related to extreme ultraviolet (EUV) nanolithography where the emission of electrons is playing a key role. The experimental techniques will further be used to study the molecular structure of liquid surfaces of technological, biological and environmental importance.

When a material is irradiated with monochromatic high-energy photons it gives off a broad spectrum of electrons. In a photoelectron spectroscopy (PES) experiment the kinetic energy distribution of these electrons is directly recorded. The photoelectron spectrum contains a wealth of information about the sample’s electronic and geometric structure as well as about various electronic relaxation processes occurring subsequent to the initial photoionization event.

In a first line of investigation the EUV Photoemission group will use PES to study the microscopic properties of materials and processes related to extreme ultraviolet (EUV) lithography; the most promising technology to produce small (nanometer size) electronic components on large scales and with high efficiencies. This will, for example, involve contributing to a better understanding of the development mechanism of modern EUV photoresist materials. In conventional deep ultraviolet lithography (DUV, down to 193 nm), the lithographic process is based on the resonant photoexcitation of so-called photoacid generators (PAGs) that upon activation locally catalyzes solubility-changing reactions of the matrix (see figure). As the fundamental resolution limits of DUV lithography are currently being reached, the semiconductor industry is rapidly moving towards so-called EUV lithography, utilizing the much shorter wavelength of 13.5 nm. Interestingly, while similar chemically amplified resists can be used for DUV and EUV lithography, the development mechanisms in the respective wavelength regions are fundamentally different: The high energy of EUV photons (91.8 eV) is sufficient to ionize all molecular species in the resist film from several valence and shallow core orbitals, creating a broad spectrum of primary and secondary electrons. The activation of PAGs upon EUV exposure primarily occurs by energy transfer from these electrons, i.e. not via direct EUV photo-absorption. Hence, there are contributions to the blur of the EUV lithographically written features originating from how far the electrons on average travel before they excite the PAG. Reducing this contribution to a bare minimum will require a fundamental understanding of what electronic processes are at work in developing the film. Using PES we will directly record the electron kinetic energy distributions under realistic application conditions which will contribute fundamental insights into these processes.

The group’s second line of research is to study the molecular structure of liquid surfaces of technological, biological and environmental importance. Specifically we will study the propensities of ions, charged biomolecular functional groups and other strong hydrophiles for “real-world” water interfaces, i.e. containing organic matter of various sizes. These studies are of fundamental importance to environmental chemistry and molecular biology. For example, surface-specific photochemistry of aqueous aerosols and artic snowpack plays a key role for the uptake of halogens into the gas-phase, which in turn greatly affects the chemistry of the marine and artic troposphere. The mechanistic origins of the anomalously high production rates of larger halogens, such as Br2 and I2, were, however, for long unknown. Consensus has now largely been reached that strongly varying propensities of the precursor halide anions for the water-air interface are important parts of the puzzle. The exact physical origins (such as solute and solvent surface polarization, hydrophobic exclusion effects, etc.) of the high degree of ion specificity are, however, still under debate. While studies of pure electrolyte solution surfaces are of great importance for expanding our conceptual framework for understanding ion adsorption at real-world water surfaces, it is important to realize that they represent heavily simplified model systems: Naturally occurring salt water surfaces, e.g. of sea spray-born aerosols, typically comprise significant amounts of organic material. Natural organics, such as long-chain carboxylic acids, tend to adsorb at the water/air interface, i.e. act as surfactants. We intend to use PES to investigate the driving forces for adsorption of ions and other strong hydrophiles at environmentally realistic aqueous interfaces at which they co-adsorb with organic matter. These are highly non-trivial to foresee given the large number of interactions present in the system (water-water, water-ion, water-organic, ion-organic etc.). 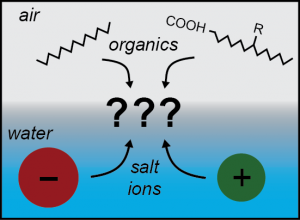 Due to the high probability of free electrons to inelastically scatter on gas phase molecules in the air, electron spectroscopy has traditionally required ultrahigh vacuum (UHV, typically at pressures <10–9 mbar). This has made the application to volatile liquids challenging. To overcome these problems the EUV Photoemission group will use a combination of a differentially pumped near-ambient pressure electron spectrometer (able to operate up to the mbar regime) and unique sample environments, allowing a broad range of systems to be studied in situ and in operando. The group will primarily conduct experiments in-house at ARNCL and AMOLF using both static EUV/X-ray sources and ultrafast laser sources. Additionally the group will perform occasional experiments at large-scale international synchrotron facilities.