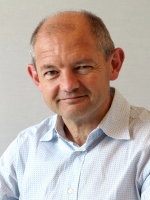 In addition to my publications at ARCNL, I have a few more. For a complete list (may not be completely up to date) CLICK HERE

Joost Frenken is the Director of the Advanced Research Center for Nanolithography (ARCNL) in Amsterdam, The Netherlands.

From 2007 to 2013 Frenken has been the Scientific Director of the Dutch, national SmartMix consortium:Nano-Imaging under Industrial Conditions  (NIMIC). In addition, he has served as the initiator and Director of the Dutch NanoNextNL program on Nano-Imaging and Characterization and of several Dutch FOM-programs, such as the program on Fundamental Aspects of Friction. Frenken is a member of the Netherlands Royal Academy of Sciences (KNAW), serves on a variety of national and international committees and boards, is a past-chairman of the Dutch Association for Crystal Growth, former president of the Netherlands Vacuum Society, and past-chairman of the Condensed Matter Division of FOM, the former Dutch national physics funding agency.

In addition to regular research grants, Frenken has been the recipient of several awards and prestigious research grants. In 1985, he won the Nottingham Prize (45thPEC meeting, Milwaukee), in 1996 he was awarded a “Pionier” personal research grant from the Netherlands Organization for Scientific Research (NWO) in combination with an NWO-Groot large investment grant for the development of advanced scanning probe microscopy. In 2004, Frenken was the recipient of the Science Prize of IUVSTA (International Union for Vacuum Science, Technique and Applications) ‘for his pioneering work in the development and application of scanning probe microscopy to study various dynamical processes at surfaces’, in 2007 he received the Jacob Kistemaker-Prijs (triennial, Dutch physics award)‘for the development of and research into dynamical scanning tunneling microscopy under extreme conditions and for making this technique of use in chemistry and biology’, in 2010 he received an Advanced Grant from the European Research Council (ERC) for a research program on Science F(r)iction.He was the recipient of the 2012 FOM-Valorization Prize (Dutch award for valorization of basic research in physics). Frenken was co-applicant of the 10-year NWO-Gravitation program Frontiers of NanoScience (NanoFront) that was awarded in 2012 to the universities of Delft and Leiden. In 2017 Frenken was awarded the Innovation in Materials Characterization Award of the Materials Research Society (MRS) ‘for the development, application and commercialization of high-speed, temperature-controlled, in-situ scanning probe microscopy, leading to key insights in the structure, dynamics and chemistry of surfaces and interfaces.’

Central to the research of Joost Frenken is the fundamental understanding of the dynamic aspects of surfaces and interfaces and their role in relevant, natural or industrial processes under practical conditions. Topics of interest have included surface diffusion, crystal growth (e.g. graphene), surface phase transitions, catalysis, and friction. The emphasis of Frenken’s present Nanolayers group at ARCNL is on the deposition, growth and evolution of thin and ultrathin layers. For tailor-made measurements in each of these areas, Frenken’s research group has developed a variety of special-purpose scanning probe microscopes as well as dedicated instrumentation for surface x-ray diffraction.

Frenken has been (co)-initiator of two spin-off companies. Leiden Probe Microscopy BV markets commercialized versions of the research equipment developed in Frenken’s research group, with an emphasis on advanced scanning probe and x-ray diffraction instrumentation. Applied NanoLayers BV is specialized on the large-scale production of high-quality graphene and other monolayer materials.